Well...here's something completely different. My good pal Randy Robinett has been on the lookout for a decent shooter grade Savage 99 in 250 Savage for quite a while. He recently snagged one complete with a period correct Weaver steel tube K6 and started right in on shooting it. Long story short, he got the thing shooting honest 3 shot groups under the magical 1" mark...a heck of an accomplishment for a gun like this with a two piece stock. In our conversations, we started talking about how these guns tend to crack the butt stocks behind the rear tang since that and the lower receiver cut are what the factory uses as the recoil bearing surface. The stock on this gun was perfect in those areas, giving more creedence to the fact that it hadn't been shot much. One thing led to another and pretty soon we decided to see how much, if any, tweaking the 'bedding' could help. Looking back, I think R.G. sucked me into this project because he knows I'm a sucker for any orphan gun and "That will never work!" type of stuff...Randy coined that phrase, by the way!

The original attachment method for the butt stock uses a long, flat blade screwdriver slotted 5/16" bolt with a washer that sits against a ledge. Not a lot of purchase or load bearing area and being wood, it compresses over time...more on that later. The agreed-upon approach was to fit a pillar into the stock. First, I enlarged the 5/16" hole to 3/8" using a long drill bit. Then, with a 3/8 '" pilot in my 3/4" counter bore and a long drill bit extension, enlarged the hole in the stock to 3/4" all the way into the area where the lower receiver butts against the stock. This had to be done in sections as the hard walnut would build a fair amount of heat in the counter bore. 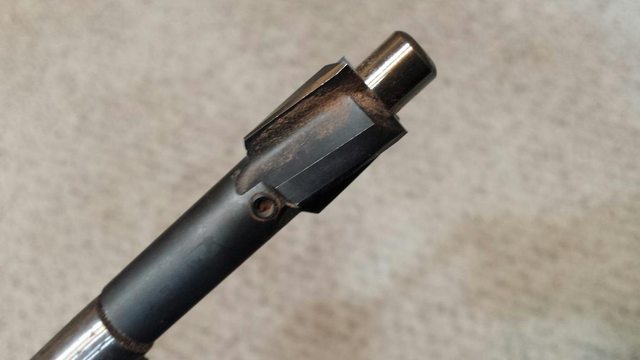 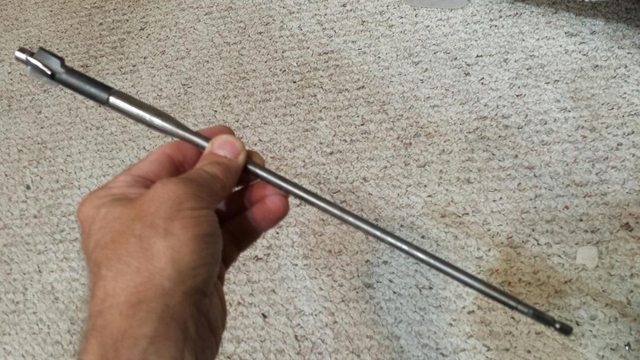 Made the pillar from some 3/4" 6061 T6 round. The undercut areas are of different diameter to help hold as much of the bedding compound as possible in each area as it made it's long trip down the stock. One end is cut with a 11/16" end mill to match the curve of the receiver. When epoxied in the pillar was backed up about .075 to allow a good amount of bedding material between the pillar and the receiver. 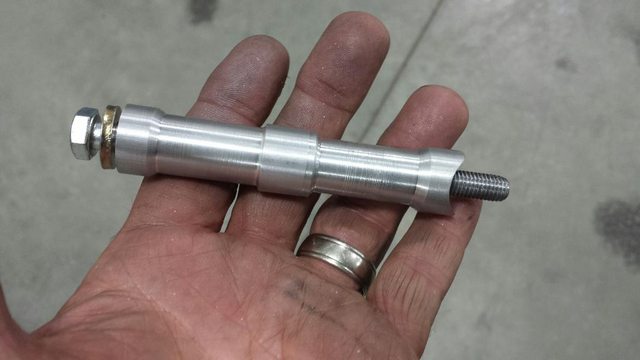 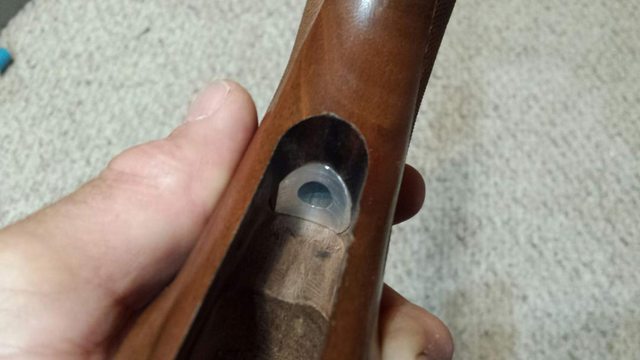 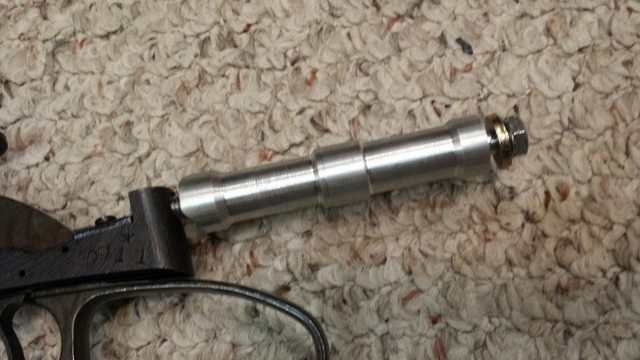 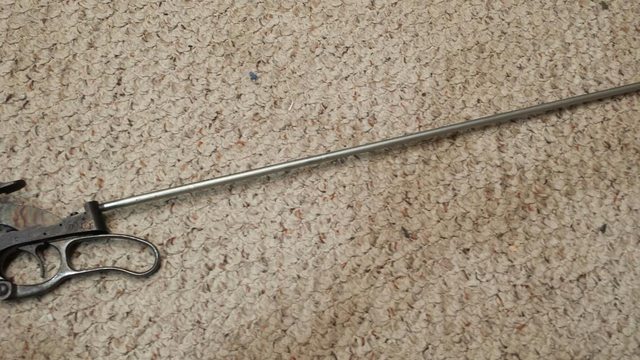 Allowed the pillar to set up for 48 hours, then did the bedding. The guide rod did double duty as it gave me something to rap on to free the receiver from the stock. Hopefully.....

Here it is as it came apart, prior to clean up. You can see where the little 'shelf' of the rear of the receiver was bedded also. I shortened the area of stock ahead of the 'shelf' as the operating lever was rubbing on it. 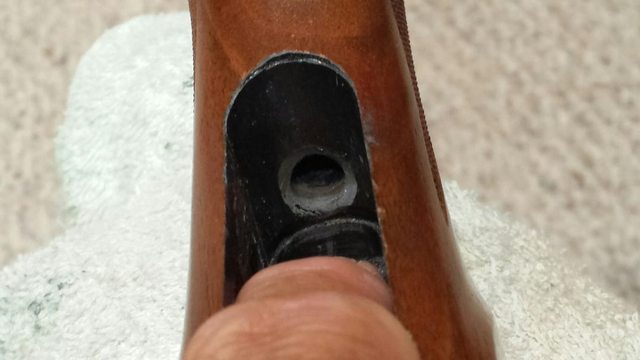 The next area was the fore end. Randy had discovered that the original screw was stripped and only a couple of threads were holding it. It mounts to a spud dovetailed into the barrel with some pitifully small 8-40 threads. The cause of the issue was that the hole in the fore end was positioned too far forward from the factory by about .090 so the screw went in at an angle. Here's a rough idea how far it was off. 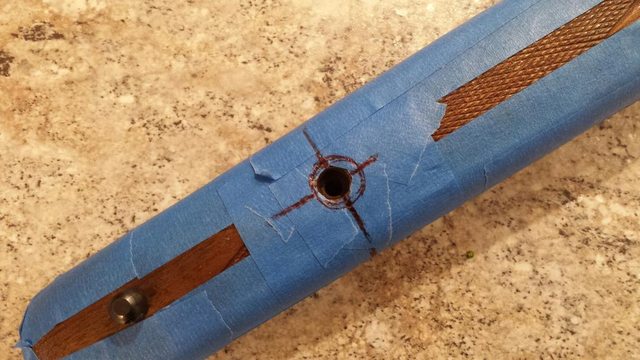 I taped the fore end up to minimize any damage to the checkering and using an old trick Stan Ware taught me, put some heavy wax on a new 3/8" plunge cut end mill, centered it on the mill bed and went down in there. It did nick a couple of spots but overall, not too bad. Figuring it needed a bit of old school panache, I did the screw escutcheon from brass. Randy had supplied me with a new factory fore end screw. 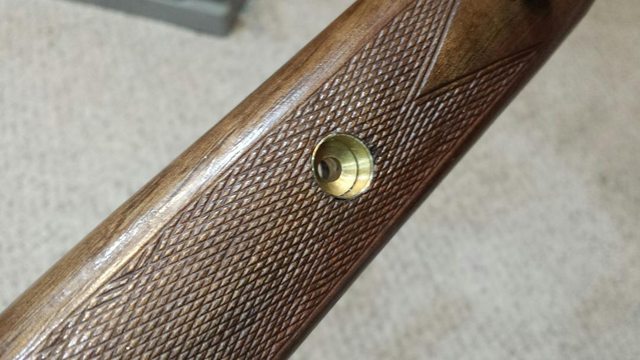 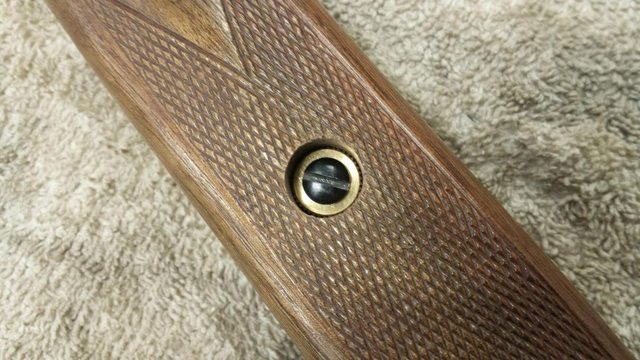 Unfortunately, the threads in the barrel spud were really loose and in the end, I cut down a shoulder bolt and threaded it a bit oversize in an attempt to tighten up the fit. 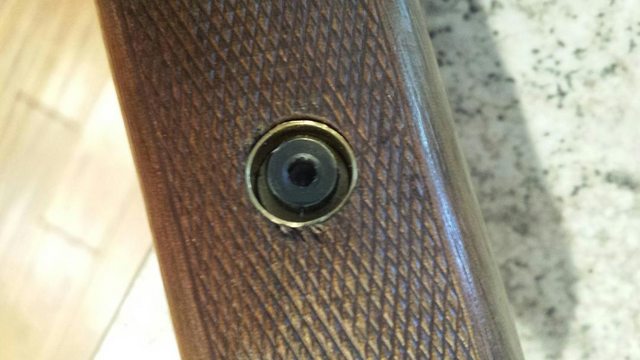 The barrel spud. In the second pic, you can see a little rubber insulator I put over the spud to act as a vibration insulator. Between the bottom of the spud and the fore end screw recess, there's some soft rubber washers to eliminate any hard contact. I stacked some up until there was a small. amount of barrel clearance. This extra clearance made the longer fore end screw necessary. 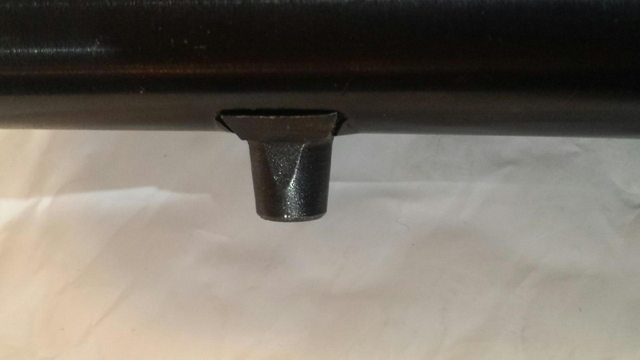 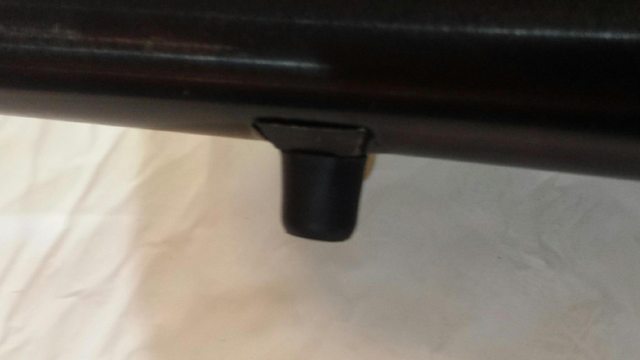 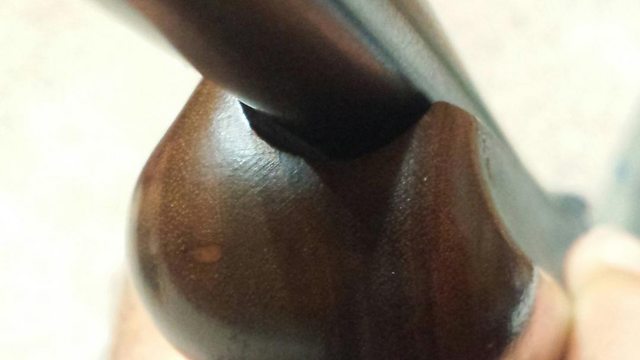 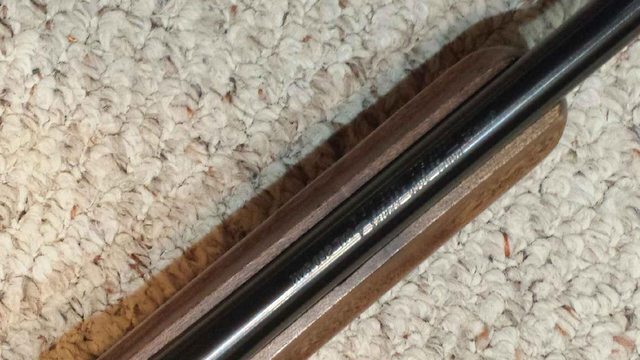 There's about .015 clearance around the top tang now. The lower receiver carries all the load and transfers it to the pillar and stock. 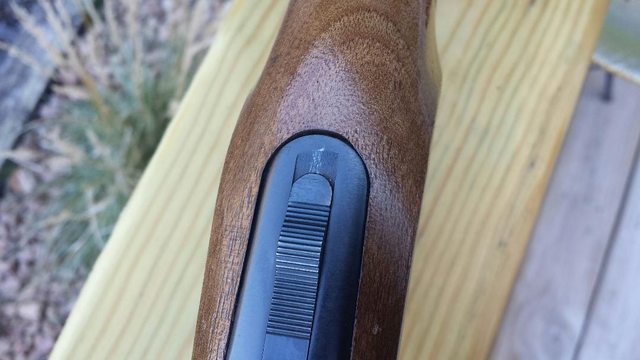 Outwardly, it still looks relatively untouched. Did it make it any more accurate? Heck...Randy had it shooting better than any Savage 99 has a right to before it came to me......for all I know, I may have made it worse! It's been a real treat to work with Randy on this project. We both have enough 'twisted sister' in us to enjoy stuff like this!

A classic-cool rifle in every respect. It will get back into the field in Randy's hands and account for quite a few more deer...just like what it was designed for! 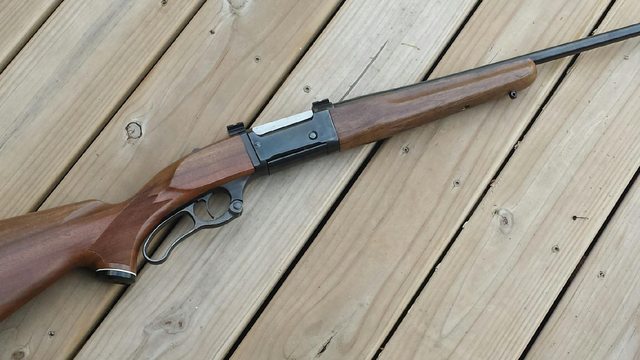 That's awesome Al. You are a master of the gunmaker arts.
A

tnv said:
That's awesome Al. You are a master of the gunmaker arts.
Click to expand...

Thanks...but I'm really not ! For example, I don't chamber or fit my own barrels...a good pal does them. I could never get as good on barrels as him so it just makes sense to have him do the chambers and threading. I'm an amateur tinkerer-type of guy. Honestly, most guys can do this stuff if they had access to a mill, lathe and spent a little time on them with some good instruction from a real machinist. The main thing is to not be afraid to do stuff. Being able to get out of throuble is important. As you go along, you gradually make the transition to staying out of trouble to start with.

Really enjoyed that read. Absolutely should have eliminated that common issue on 99s. I've tried to love those guns since I shot my first deer with one, but I just can't warm up to them. Be curious to see if it improved an already great shooter.
T

Let's see some groups with it.
D

very cool Al. Like everyone else, I want to see how it shoots!
A

Me too! Right now, it's currently in Wyoming on a mule deer hunt. If successful early on, the plan is to use it to fill a second tag. -Al
Last edited: Oct 16, 2021
D

Have a well used 1954 99EG I purchased with paper route cash back in 1971 from a good friend of my father. Weaver K4, of course. It already had lots of stories to tell from the looks of it but don't believe it was shot as much as carried afield. Got my first buck with it later that same year. Still have it and have taken it down to clean up its internal nether regions but not anywhere near to your exemplary efforts. Thank you for sharing the proctology exam, good doctor....

Good luck in WY. Love chasing elk in that state.
B