I've got a few different flavors of 'dog guns....old beaters for walk abouts and some nicer ones for sitting at a bench while giving each other crap and generally having a relaxing time. I guess this one falls in the later group:

Panda R/R, Krieger 11 twist chambered in .20 Practical (.223 necked to .20, no turn necks), Jewell trigger with safety, Kelbly HBR stock. Just finished it up and haven't fired a round yet..hopefully this week. 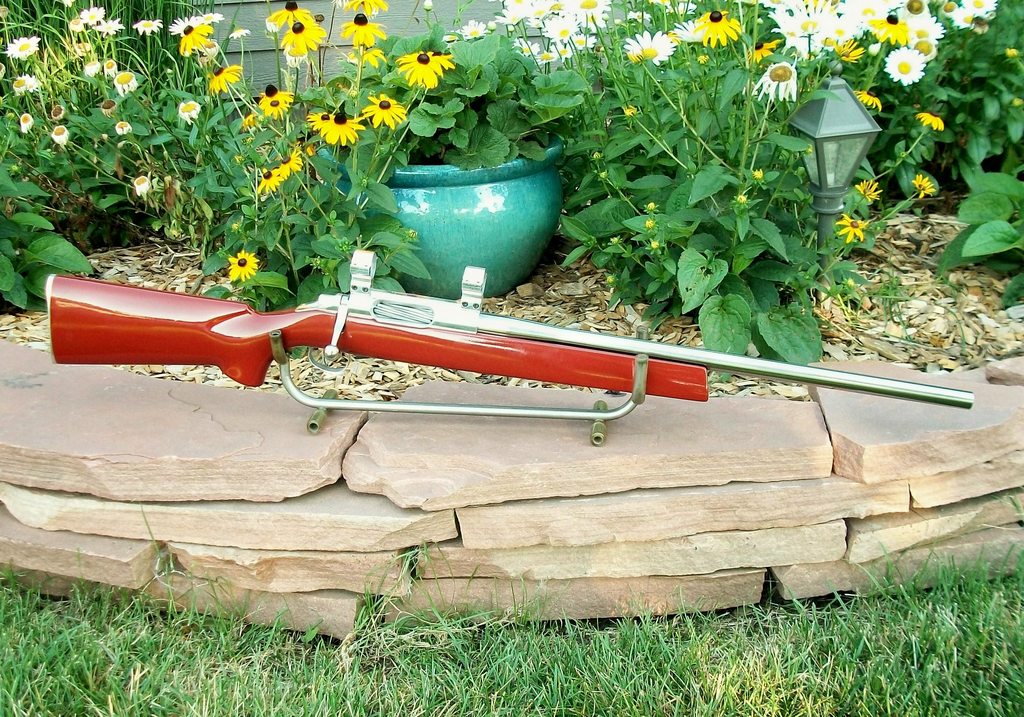 Not enough to ruffle the down on a maidens cheek.

Not enough to ruffle the down on a maidens cheek.
Click to expand...

It's got one of my old BR scopes on it now for load work. After that, I'm undecided. I've got a late '90's vintage Nikon Monarch UCC 6.5-20 with fine cross hair that's rock solid and a straight 12X. For 'doggin', there's a lot to love about a fixed scope.

Most of the new scope offerings just leave me shakin' my head.

It's added weight isn't going to hurt you,though it's glorious reticle will open new windows of opportunity to you. The windshield alone will do more for you,than either glass you cite,due the fact it's etched an unwavering,as well as granting huge subtension latitude (10 Mils of elevation). They track uncannily and retain zero like nothing else. 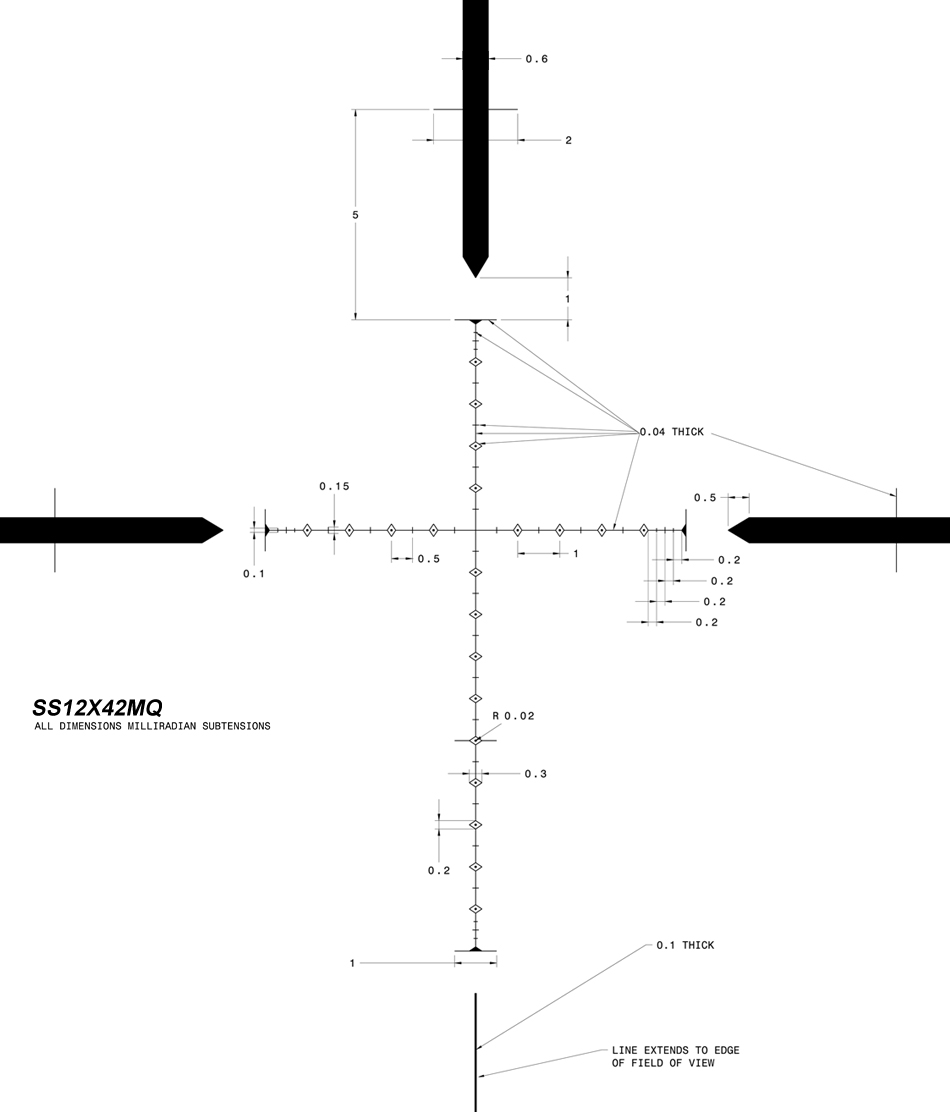 Case in point,factoring a 32gr V-Max at 4100fps launch and a 200yd zero...suffering my sealevel atmosphere. Gawking the reticle alone,will get 32's to the 950yd line and you can contend a 10MPH full value wind,at the same distance.

Al, one day you should put up some pics of your beater rifles. Everything you post is way too classy for me!
B

It's a busy reticle (compared to what I normally use), but I like the MQ approach. With a 200 yd zero, and given that most shots on 'dogs are inside of 400 yds, holding off for wind and elevation should be simple.
B

It's a USEFUL reticle and that's what fucks alotta folks up.(grin)

From minutes ago,the only Victim I could spy at your ascribed 400yd line,was a Seagull at 398.6yds,according to Mr. Kilo. Atmospherics have been tough for a spell and especially today,as even at 3:30AM,the northerly was honking. Though protected in this instance/locale/angle,my intuition would have me calling it a Double Full Value impetus(20mph at a right angle). It's blowing from left to right.

So in that situation and despite elevation come-ups being rather modest on this Platform,at said distance(BMFOTP squirting formed 50's at 3680fps,with this Lot of powder) and with others of the ilk in vicinity(back to factoring your Gopher Carnage),I'd certainly DIAL elevation. 400yd elevation correction is 13" or .9 Mils. Obviously being a Mil/Mil platform,in that both the erector and windshield are Mil Scale,i'd input .9 Mils on the erector. Lotsa ways to get there,but I'd dial a whole Mil and skin it one "click"...which takes a nanosecond. The ability to hold on stadia,as opposed to thin air,is a great asset on itty-bitty-esque sized Victims. It also helps chase wind feedback. Hint. 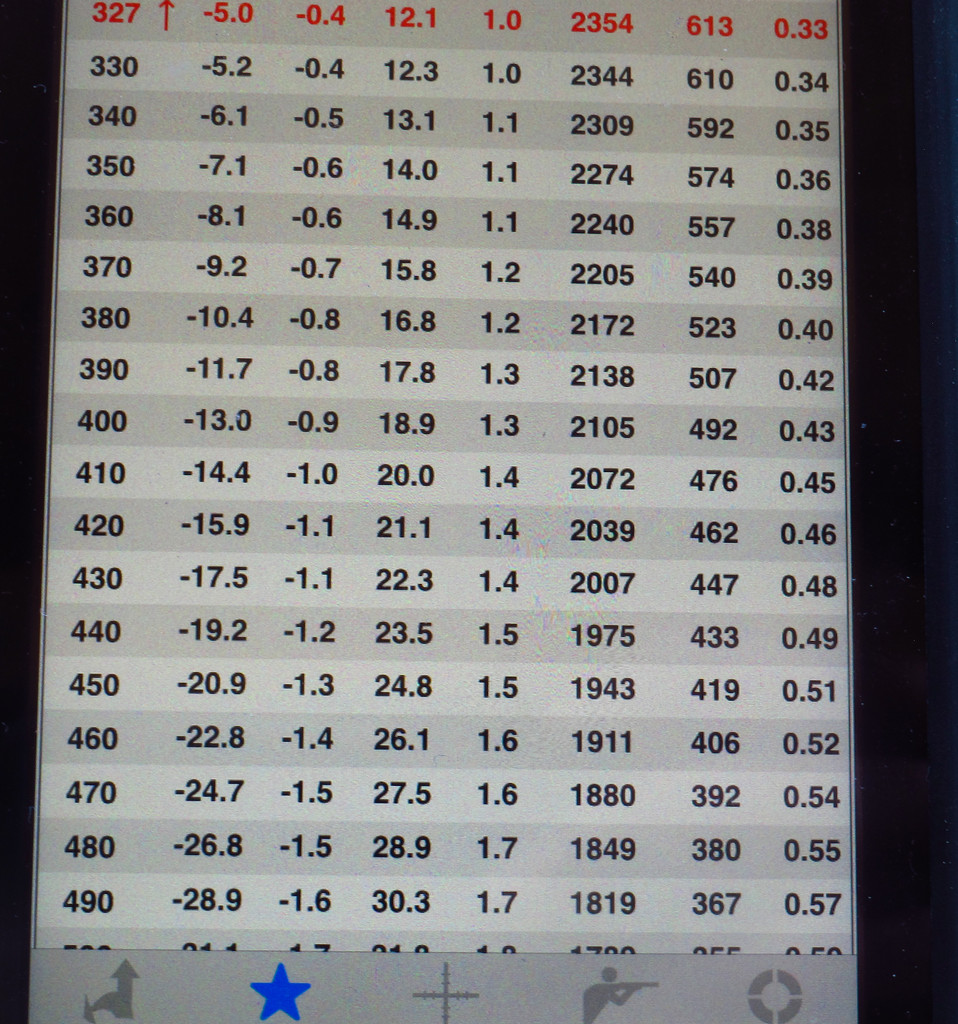 Ele dialed,but no wind slid on the reticle. 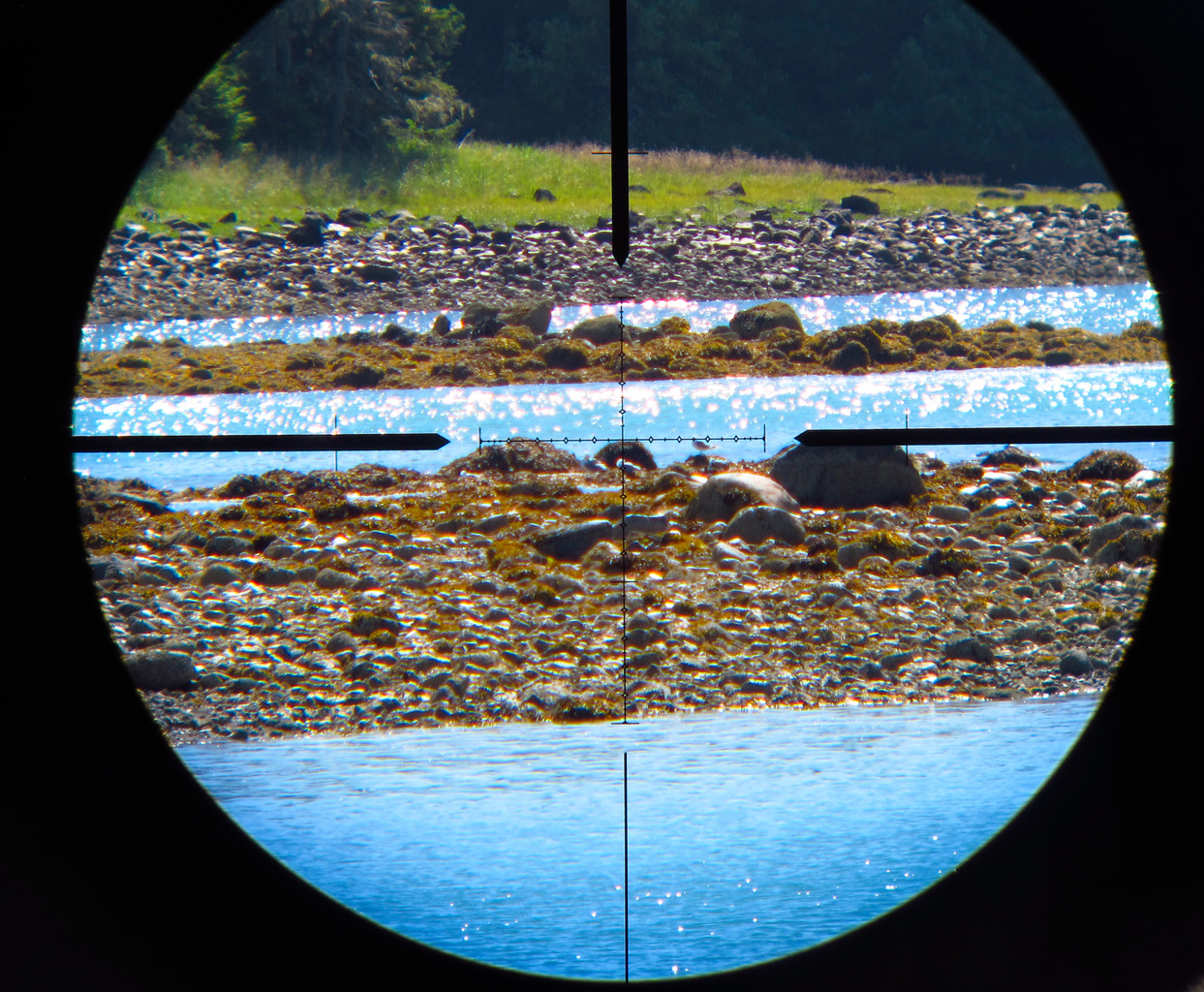 It is that easy,to align POA/POI on a target of that size(Gull's head),at the 400yd line with the 12X MQ and eggs are easy at the 600yd line...if only for conversation.

Victim is in lower left of frame,on the left hand side of first big black rock. That perspective might can help you. To kinda come full circle in relative speculation upon your Orange Crush,as per a 32 'Max at 4100fps 1.8" above bore,in my atmosphere and also zero'd at the 250yd line. The BMFOTP 50's arrive at 2105fps,or 47fps slower than a 32 started 420fps faster. Long way of sayin',at said distance,they's birds of a feather and pun be intended.(grin) 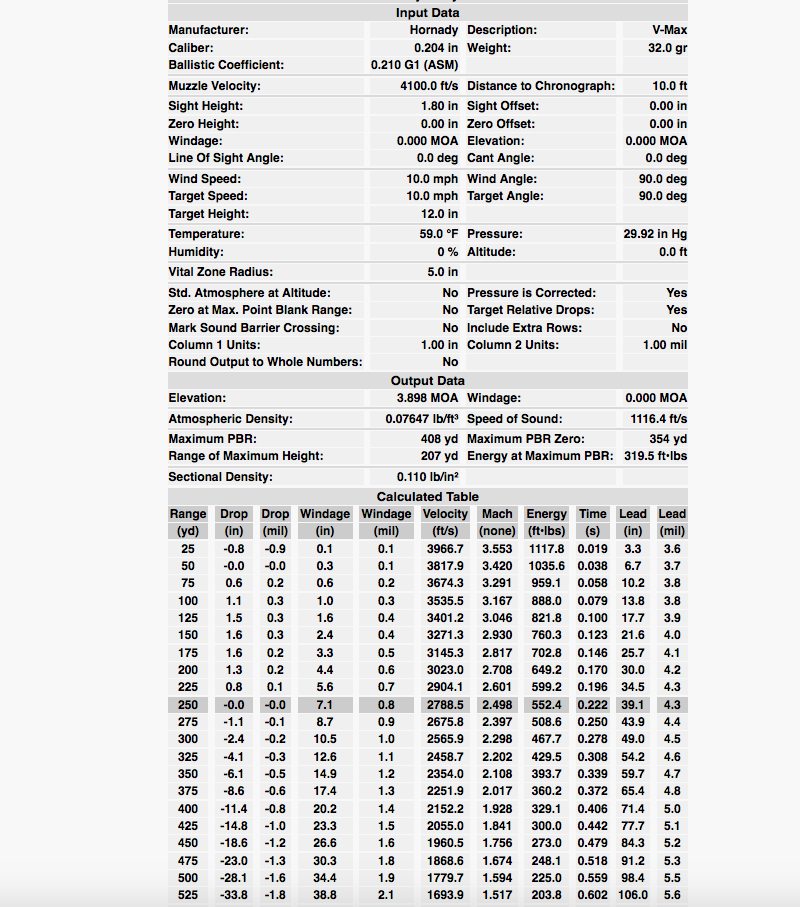 Anywhooo...it is a HUGE advantage to MQ,as applied to learning/cheating atmospherics and especially wind. That due the fact,it is a Wind LRF if/when factored in 10mph Full Value. In that approach,one can measure every poke and that feedback is instantaneous real time actuality,which can be extrapolated to an opening move. The ability to correct and more importantly correlate holdoff's,is beyond HUGE.

Should add,that on a piss flat day,I'd happily gun the reticle to the mechanical threshold of the platform...the distance in which 10 Mils of subtension would get me.

Often(daily) on 22LR's,I'm gunning ALL of the erector and all of the windshield and wishing for more. Multiple platforms grant 50 Mils of total ele correction,with erector/windshield melded.

LOTSA MQ's get sold,by just one press of a High Zoot 22LR's trigger.

MQ is hard to leave.

Will undoubtedly be what my .20 gets.

Trying to decide between the .20 Tac and Vartarg...
R

Why Tac and not Prac?
L

Just going on the recommendation of my ‘smith. I see no real advantage in one over the other.
C

Main advantage is cost of the dies.

I get to toss 'em all in the crummy and gun 'em side by each(daily).

When weather goes to shit, I shoot a different rifle.

Aint no thang.
B

I have more than one rifle and tend to build/procure,with thinking bullets first. Very easy to greatly increase performance,without adding a buncha noise,recoil or expense...so I do.

Purty tough to whoop a .224" for Utility and they'll happily knock the stuffing outta Goodly Sized Critters,with 75's and the like. I tend to shoot the .378" caseheads in that diameter,more so than .473's,because it don't take a whole lotta case to scoot them meaningfully. 'Course there's some Real Estate to get gobbled up and it's an easy choice to tote something that'll do same and easily.

A 21" 223 SALAMI will happily grant 2900fps+ to a 75 ELD and that's alotta ass,for zero fucking around. It'll do 2650fps with an 88 in same,will arrive the 500yd line with greater remaining impact velocity(despite starting 1450fps slower) and essentially 50% of the wind drift of the 32. Will an 88 recoil more than a 32? Yep. Is the felt recoil impulse gonna hurt production? Nope. Seen it.(grin)

Bullets matter a smidge and increased RPM,do not hurt Goo Flingin' either. There's Method,to the Madness,even though most folks cain't savvy.................
C

The 75's will kill em and they make hits easier when the wind gets going, but when conditions are right, there is no up side to them.

Besides, they are all fun. 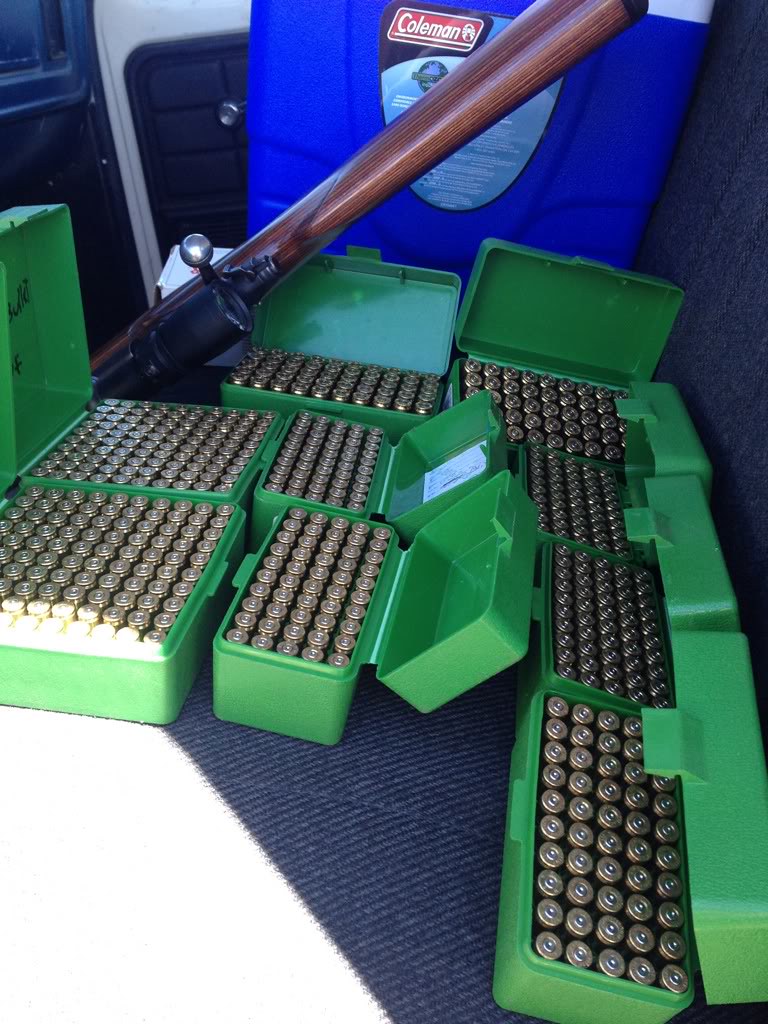 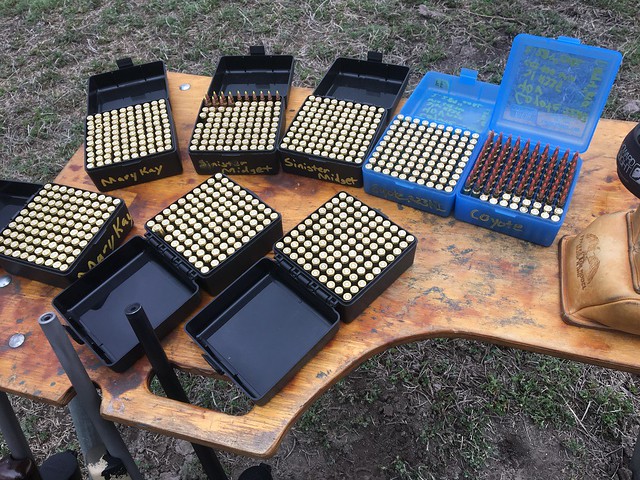 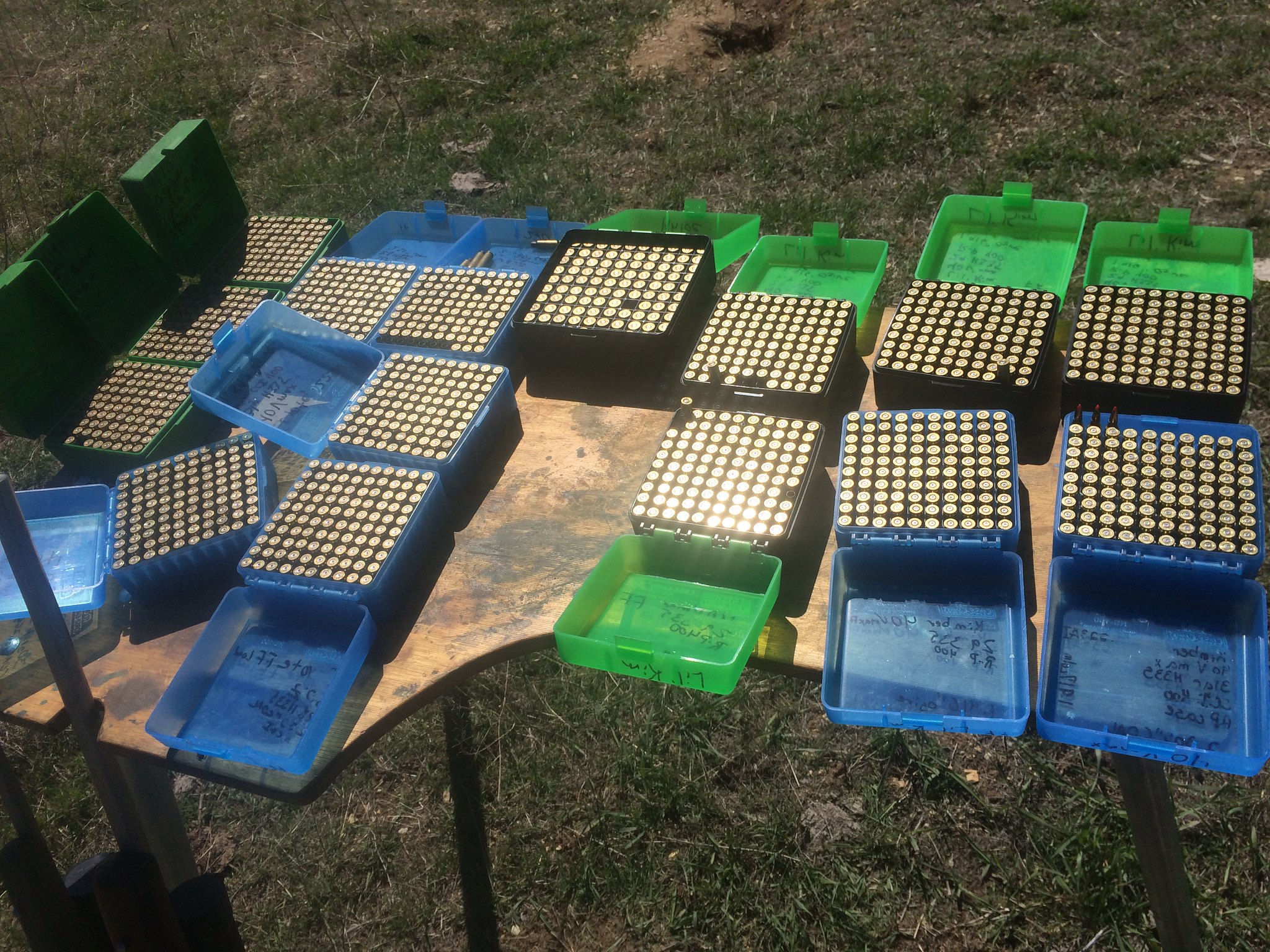 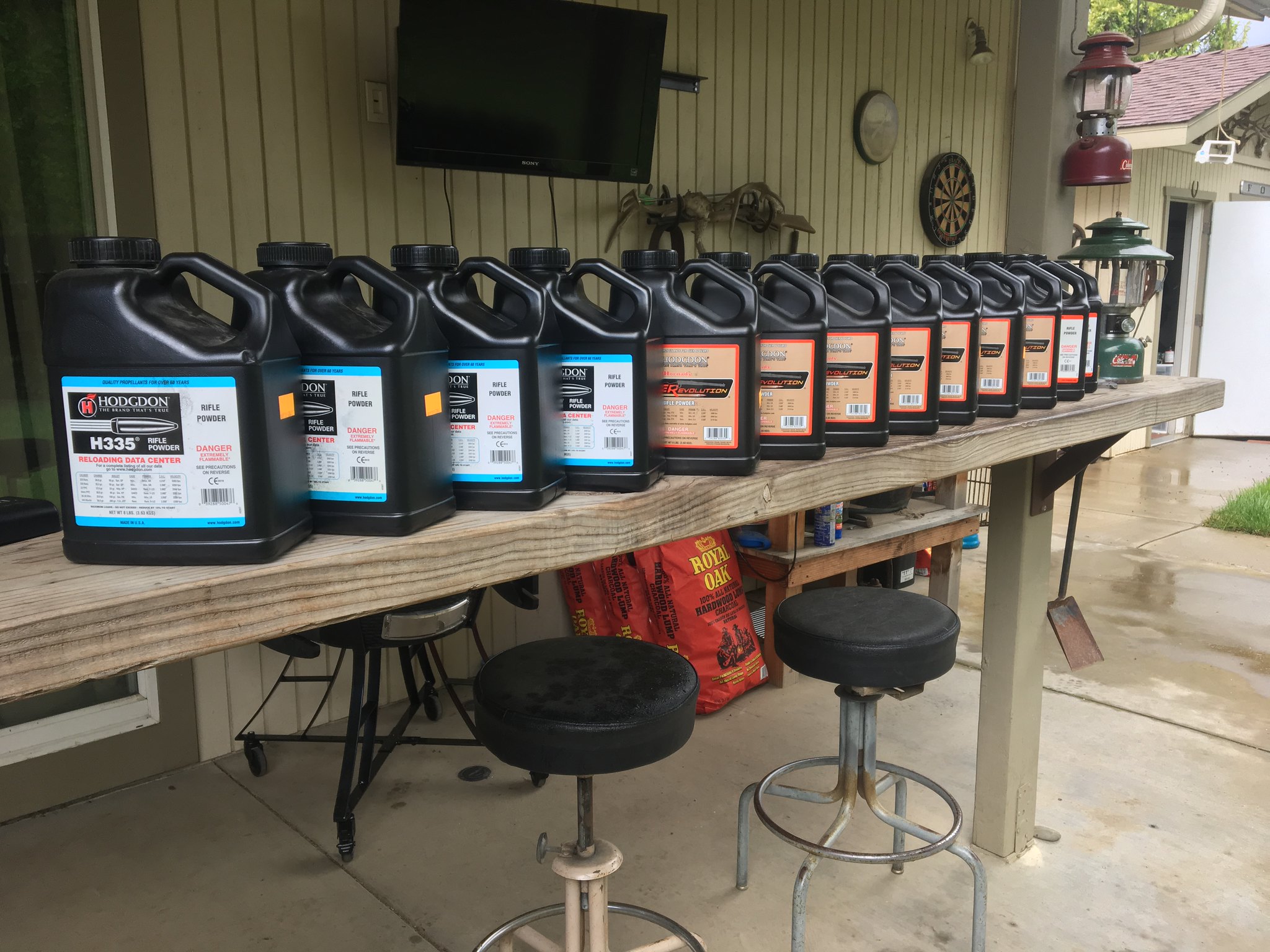 In nice conditions,in a goodly 'Rat Patch...I'd be gunning a Vudoo.

I Vudood a bunch of sage rats this year.

Entirely different thing than a 20 prac and 32's. 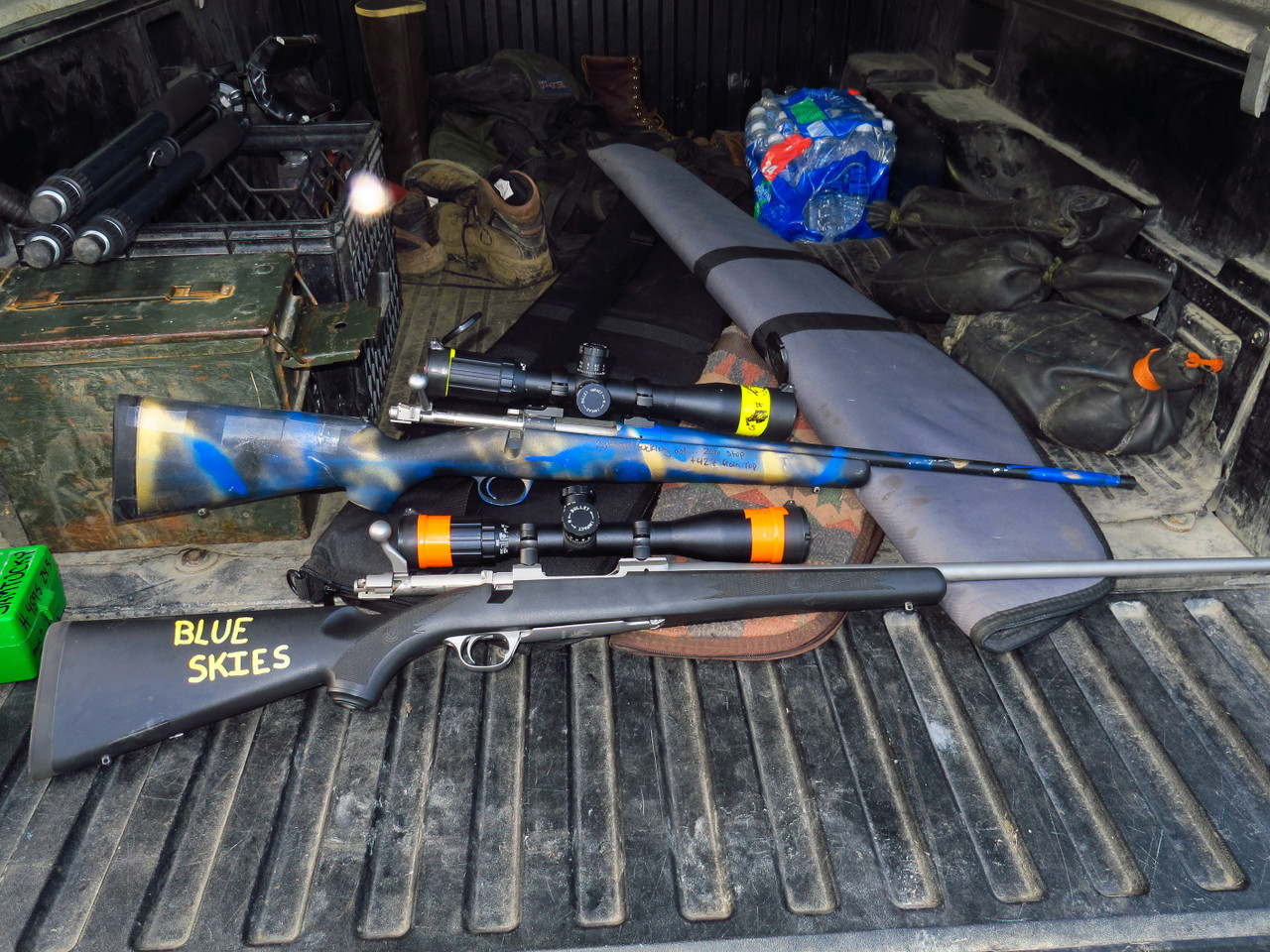 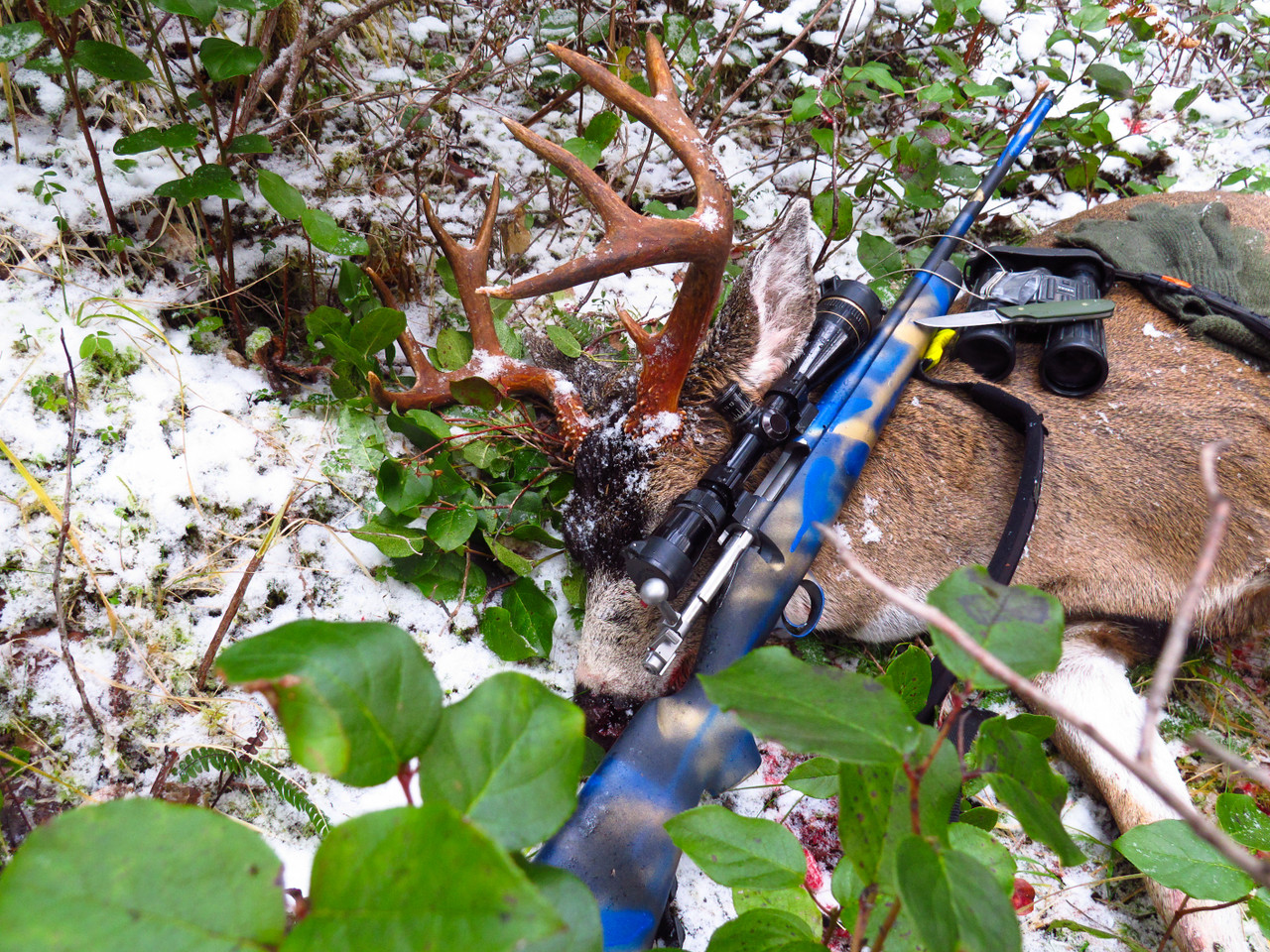 I've been tied up with family reunion stuff (all good) and have yet to fire a shot. Am going to fire a few this morning to get some cases to set the dies.

Here's some representative groups with the BIB 40's in another 20 Practical (not mine). 3 shot groups, as noted on the target. N133 and H4198 Extreme both shoot. I suspect Benchmark will also be a player. Mine was done with the same reamer by the same 'smith. 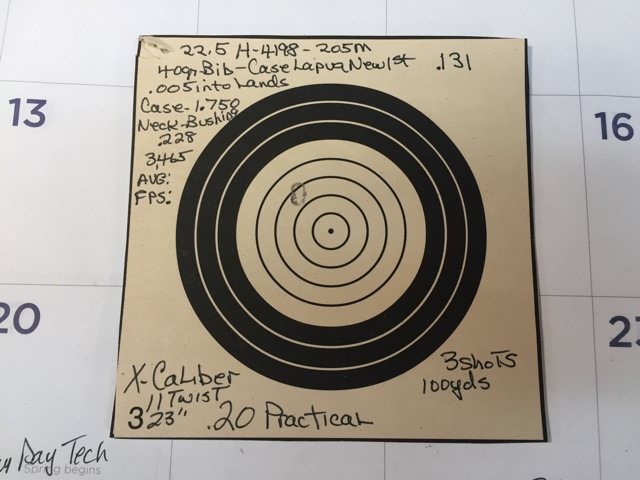 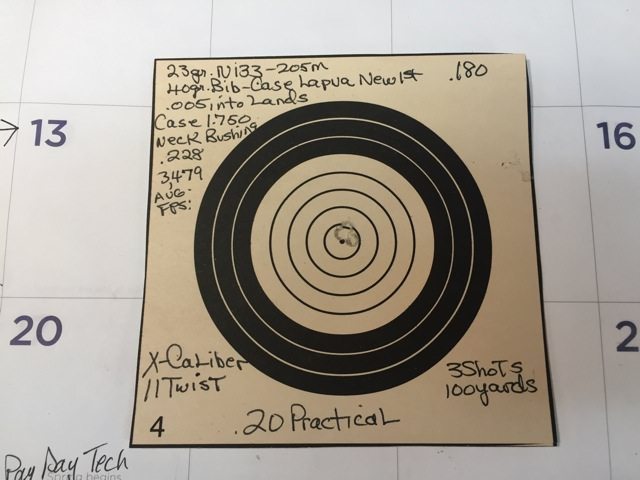 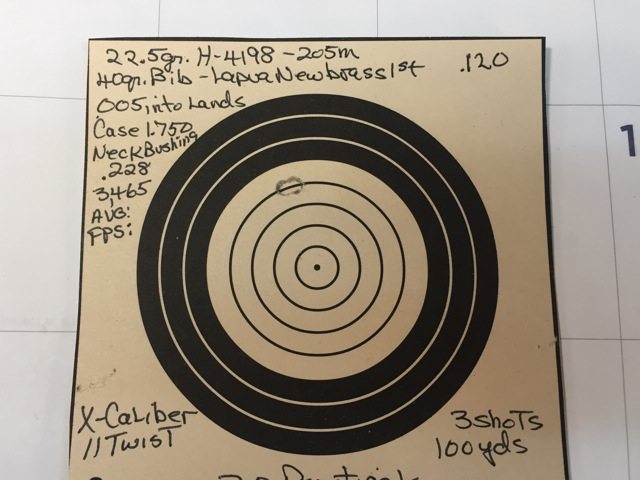 Randy has used his 40 gr. in his 20BR to whack long range rock chucks and they surely do connect. I've seen it in action on one of our 'dog shooting trips and it's impressive. 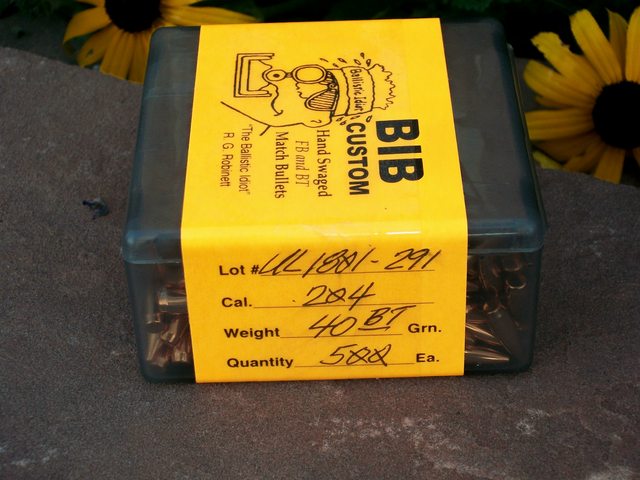 Al, I see those groups were shot with an X-Caliber barrel. Do you have any personal experience with their barrels?
B

Somebody was holding hard.

Al, I see those groups were shot with an X-Caliber barrel. Do you have any personal experience with their barrels?
Click to expand...

dakotagun said:
Following...Al, I see those groups were shot with an X-Caliber barrel. Do you have any personal experience with their barrels?
Click to expand...

No personal experience. Initial reports were pretty favorable, as I remember. 'Stick would be a better source of practical experience with 'em.
D

Finally got to the range today for some initial load work on my 20 Practical. These were all virgin cases. I elected to do the cases a bit differently than most for the initial fire forming. I faced off a shell holder .005 to push the shoulder back, ran new Lapua cases through a .223 neck die, then through a Redding 223 f.l. bushing die with the .230 bushing spaced up just enough to form a false shoulder. I also used a Redding carbide floating .20 cal. ball expander to make the neck i.d. as round as possible. The bolt closed with just a slight bit of resistance and the cases f-formed beautifully with a sharp neck/shoulder junction.

With this setup, I don't have the neck tension I'd like for tuning but all in all, it went pretty well. Now I have a good number of fired cases so I can dispense with the floating carbide neck expander and move on to working with some different bushing sizes for increased neck tension. My suspicion is that more neck tension will likely take at least half a bullet of vertical out of the groups.

The winds were l-r today. On the left two groups with the N133, I elected to shoot through the velocity changes to see how flat the groups were. As expected, I got a nice little 'weather report' group with minimal vertical, confirming that increasing power would calm the vertical down.

N133 shines. H4198 is decent but comes up on pressure really quick with these 40's. Again, no surprises.

The Kreiger barrel broke in quickly, as have all my barrels that I've 'burnished' prior to firing. Basically, after 3-4 rounds the fouling was gone and it was on to load work, cleaning only when changing powers.

A few of the groups from today: 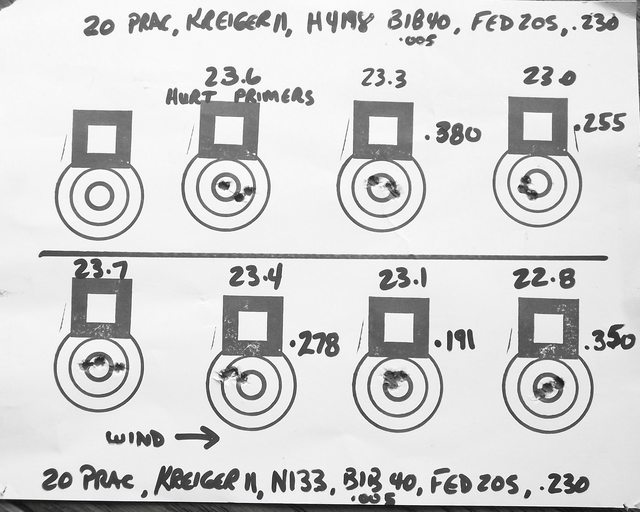 I'd say she's rating the billing.

What did you end up doing for glass?

Got an old 24X BR scope on it for load work. The optics are average and the parallax fussy...but's it's rock solid. It's my go-to scope for load work or determining if a gun has a scope issue.
C

Al, can you tell me about your barrel "burnishing"?
A

Cuando said:
Al, can you tell me about your barrel "burnishing"?
Click to expand...

On a new barrel, I use a new [color:#CC0000]dry[/color] bronze brush and make 20 strokes, allowing the brush to exit the muzzle at the end of the 'push' before pulling it back. A good fitting bore guide is a must. Then use Butches or Shooters Choice on wet patches until they come out clean. Patch it dry and you're ready to go.

I started doing this in 2005 or so and the break in process has been reduced to just a few 'shoot one and clean' cycles.
B

Al Nyhus said:
Got an old 24X BR scope on it for load work. The optics are average and the parallax fussy...but's it's rock solid. It's my go-to scope for load work or determining if a gun has a scope issue.
Click to expand...