Spending some time with my folks in Pennsylvania this week. Dad got transferred to PA a few years after I moved to Alaska, so I don’t know a soul in this state besides my parents. Made it a point this year to come down here, hang out with the folks, and let them show off their grandkids. It’s been a great time!

I’ve been shooting a bunch with Dad, this week. Takes me back to my youth, gleefully shooting his guns and burning up his ammo.

Funny story from this week...
At 70 years old, Dad is the youngest in his group of friends. They were all sitting around talking about their various medical escapades (colonoscopies, knee & hip replacements, back surgeries, eye surgeries, cancer treatments, etc.), all trying to one-up the others as the most awful stuff they’ve had done....think Grumpy Old Men.

My dad pipes up, “You know, when I was two days old I got circumcised, and I couldn’t walk for a year after that!”

that's a good one!

ur over on the eastern side aren't ya?

i came up through the west side today from a month on the beach down in the obx. slicked up a 308 montucky donor at about 9am in WV.

weather sucked, tons of downpours. and people can't drive worth a fuck. pulled a pass on the shoulder from about 8 cars back. wife was dyin when people see a camper passing on the right side.

Just got home, and I figured that I'd share some pics form our trip.

We flew into Buffalo, NY and spent some time at Niagara Falls. We'd never been there before, and the weather mostly sucked, but it was impressive none-the-less. We made sure to grab some chicken wings at the Anchor Bar, home of the Buffalo Wings, while we were in the area. 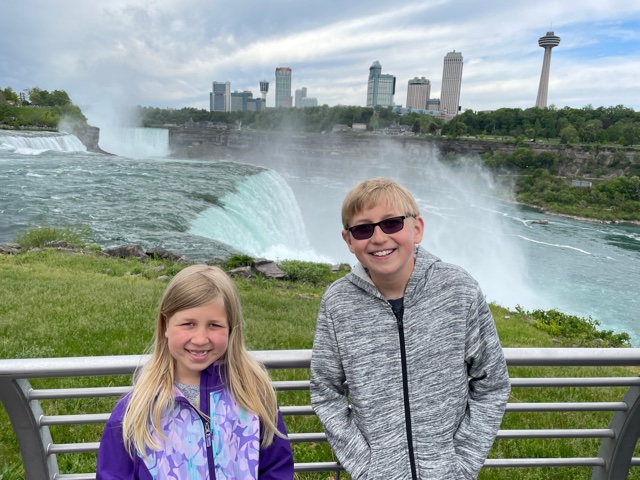 Spent some time at the Ridgeway Rifle Club. It's an impressive facility with a 100yd rimfire silhouette range, a 200 yard rifle range, pistol range with 4 bays for simultaneous operation, a 1000 yard range. All that for $45 annual dues!

Dad and I spent some time shooting 200m chickens with his Hammerli collection (Dad made the scope mounts). The Diamondback was mostly just there for looks. She couldn't hang with Swiss watches, in the accuracy dept. 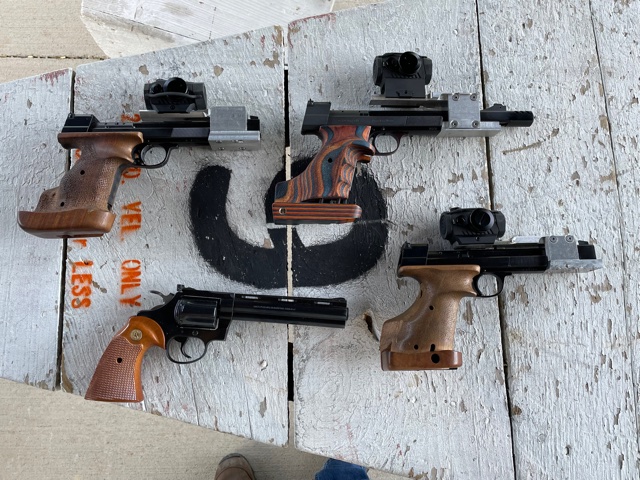 I didn't bring a rifle down with me, and Dad is mostly a shotgun shooter. We shot a lot of trap, skeet, and sporting clays during this trip, but next time I'll bring some of my rifles down, so we can do some long-range stuff.

We did visit the 1000yd range during one of their monthly Varmint Benchrest Matches, though: 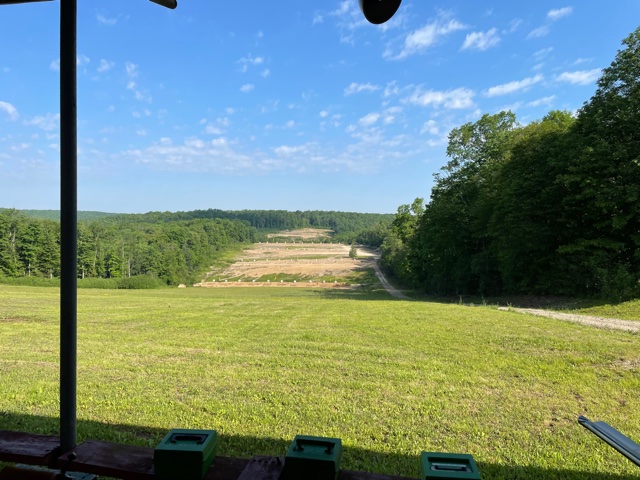 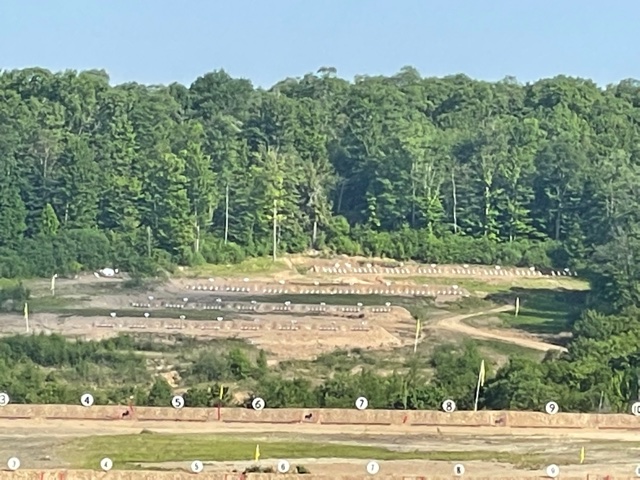 Here are the VBR targets. I don't know if you can read the distances in the photo, or not, but the crows are shot at 850 yards; the groundhogs at 900, bobcats at 950, and coyotes are shot at an even 1000 yards. 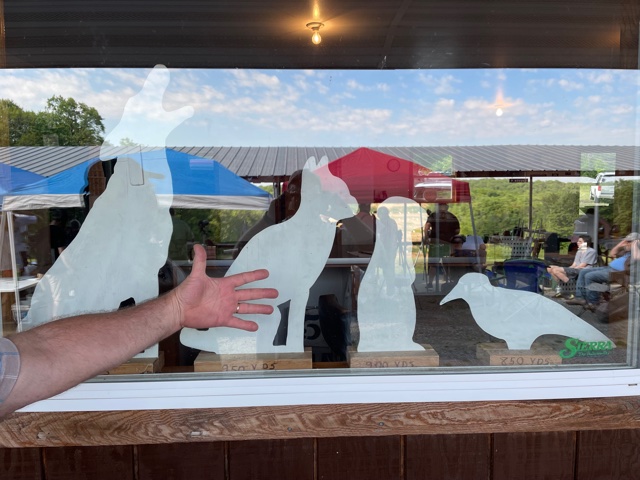 Here's another look at the 1000yd coyote target: 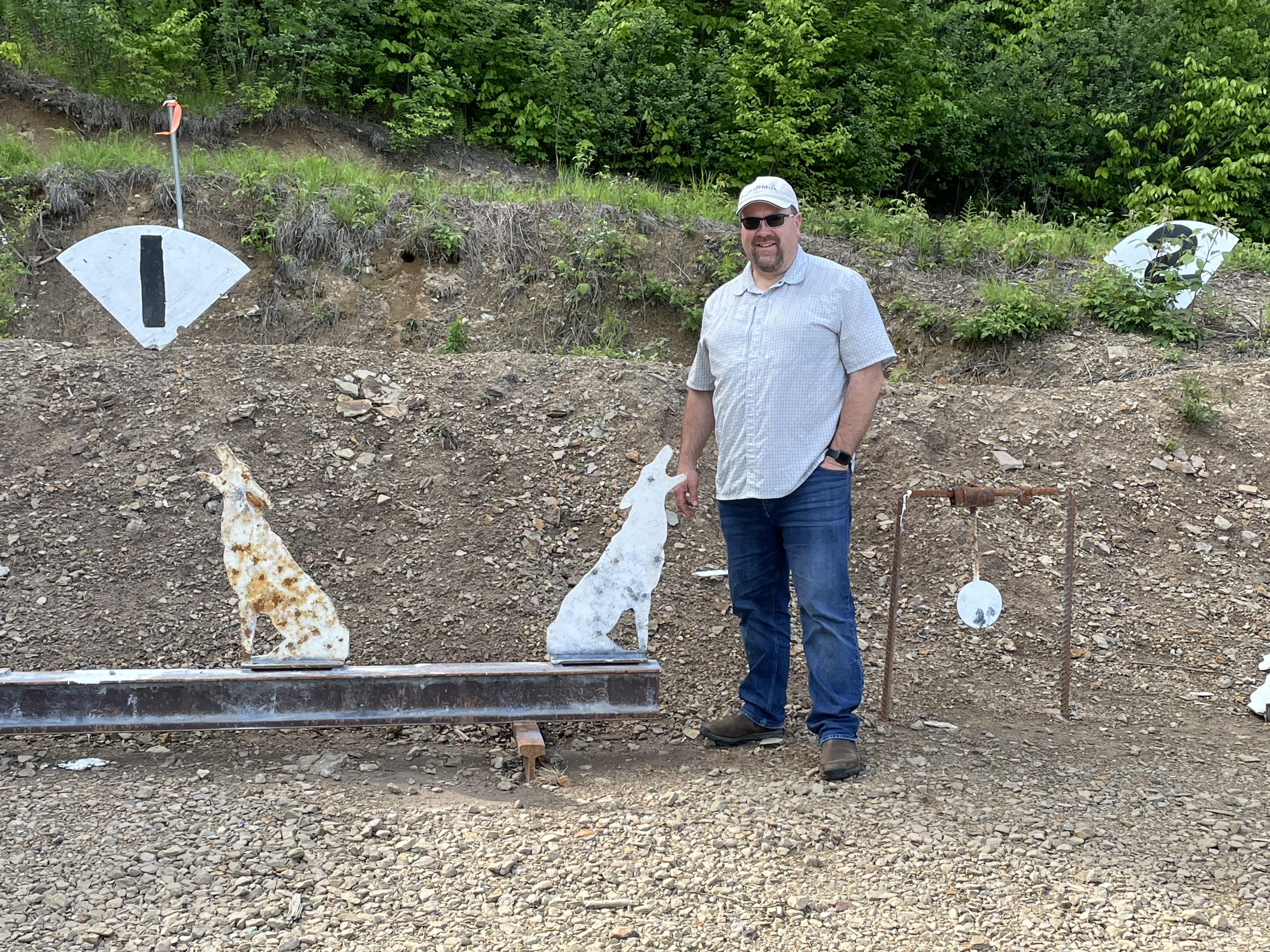 With 32 shooting points, and several relays, they had a hell of a turn-out. Lots of folks coupling up a pair of spotting scopes for better, long-range peepers: 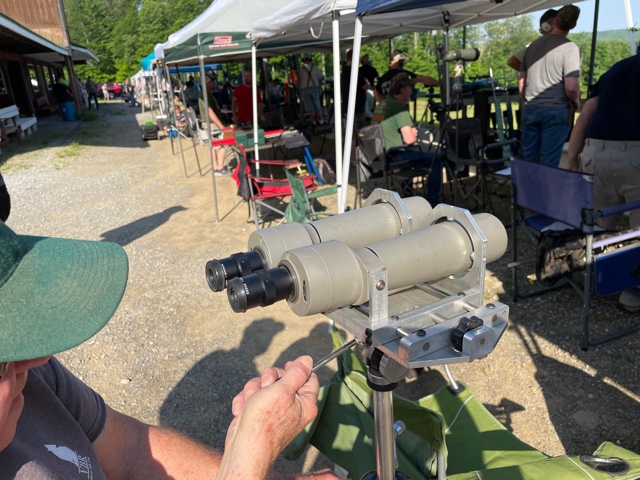 The SEB Rest "NEO" was a popular front rest, used by many of the match shooters I saw. They guy told me they were about $1800 a copy, so this game isn't for the faint of heart. 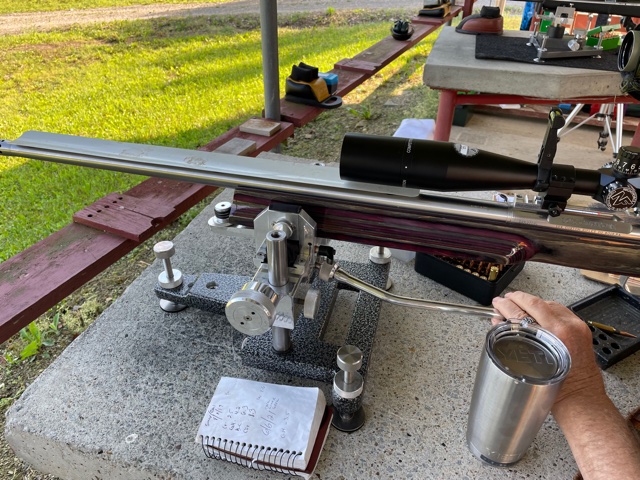 We also spend some time in Dad's shop, while we were visiting. I'm not much of a wood worker, but Dad dabbles a bit . Here are some of the cutting boards he has made this past winter: 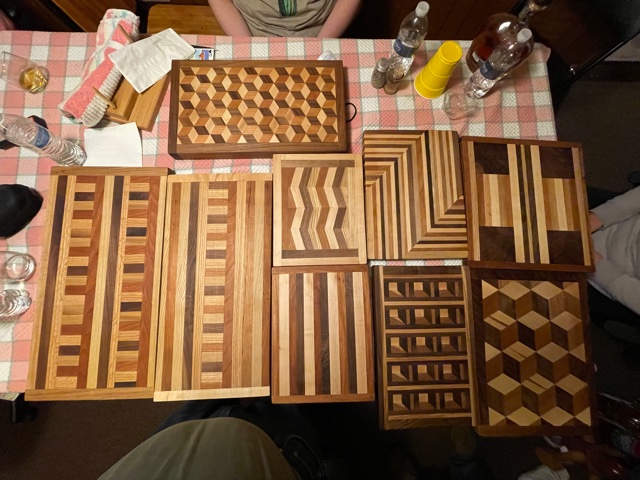 He showed me how to run the wood lathe, and I made a batch of fish bonkers while I was there. He had plenty of maple, black walnut, cherry, and ash to choose from. Pretty fancy pickins for fish bonkers, but Dad says it's all pretty much firewood to him. 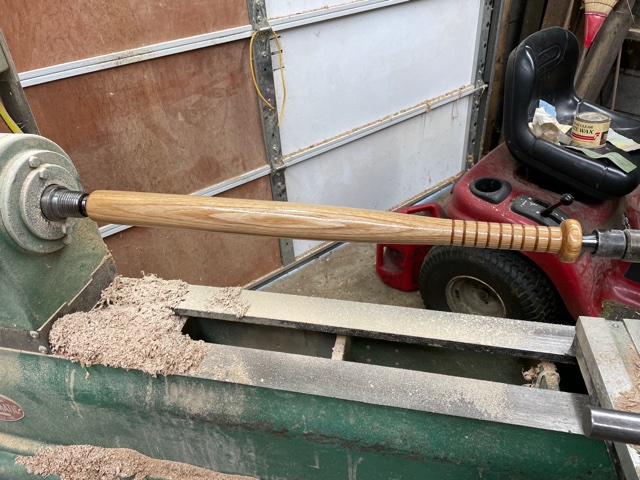 Anyway, it was a great trip. We saw and did lots of neat things, and had a lot of fun. I'm anxious to get back there to try out some of the stuff we didn't have time for, this go-round.
Last edited: Jun 9, 2021
N

oh man i'm doing a version of the same. i'm sure ur parents had fun with the grandkids!!

pretty neat hammerli's. wouldn't have thought 200m with a 22lr handgun was a thing.

now ya gotta put those bastard beaters to work off the boat.

what kinda of cartridges were used on the VBR game guns?

Ndbowhunter said:
pretty neat hammerli's. wouldn't have thought 200m with a 22lr handgun was a thing.
Click to expand...

Were were just goofing off, but those Hammerlis shoot better than a lot of the rifles I've owed. I shot about 50 rounds at the 200m chickens with the handguns. They were a regular, high-power rifle target, and you could knock them over with a 22LR at 200m, but you had to hit them towards the top of the target. I knocked four over, and I rotated the 5th target 90-degrees, but fit didn't fall over. I counted 14 hits on the chickens, when we went back down to look at them. I didn't think that was too bad, using a red dot sight and Kentucky windage.

I was hitting a lot better at the 100yd range, with the actual rimfire targets, except the groundhogs. Those were the hardest little bastards to hit. Guys at the high-power range were swearing at them, too. 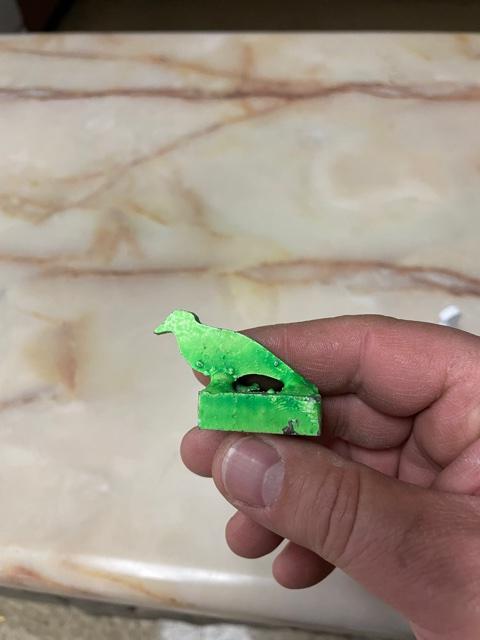 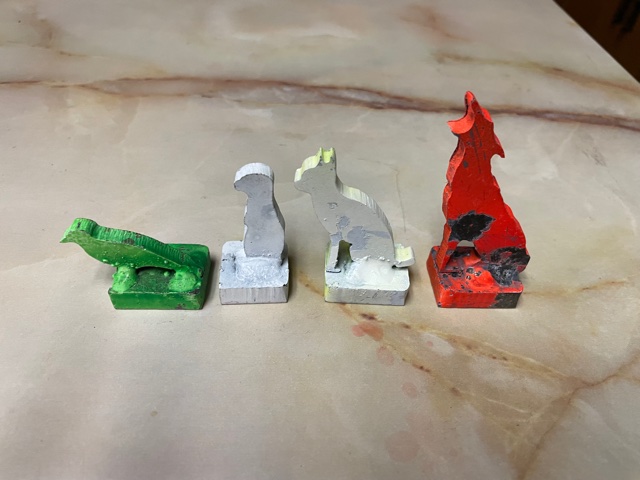 Dad is no slouch in the shotgun dept, either, with a pair of Parazzis, a Lujic, several Remington 3200s, lots of Super-X 1s, and a Beretta 682. The Lujic Monogun has a release trigger. I've never shot a release trigger, so I had to try it. Yeah, it was pretty weird, and it would take me a while for me to get used to shooting a release. I've spent a lot of time getting my flinch dialed in over the years, so it's pretty consistent with a pull trigger.

The good news is, that I got the "I think I want a Beretta" out of my system for another 15 years. I like everything about their shotguns, except I can never seem to hit shit with them. They just don't fit me, as much as I try to like them.

I shot the Super-Xs best. They are sweet shooting shotguns, and I'm glad I have one of my own.


Ndbowhunter said:
what kinda of cartridges were used on the VBR game guns?
Click to expand...

I talked to a few of the guys at the range. The one on the NEO rest (pictured above) was chambered in 6.5x47 Lapua. He let me shoot a couple rounds during their sight-in period. He had just dialed in for 900 yards. The 15-55x Nightforce doesn't give you much field of view, and I lined up on the wrong target (950 instead of 900) for the first shot. I nailed the 6" gong on the correct, 900 yard, target with the second shot though. That was the longest (successful) shot I've ever taken. That was pretty neat.

He was shooting 140gr Berger Hybrids. I forgot to ask him what powder he was running.

I saw a lot of BAT actions as the range, and there seemed to be a preference for Bartlein barrels with the guys I talked to, anyway. The rifle I shot was a 10x Custom out of DuBois, PA. It wore a Bartlein barrel, as well. 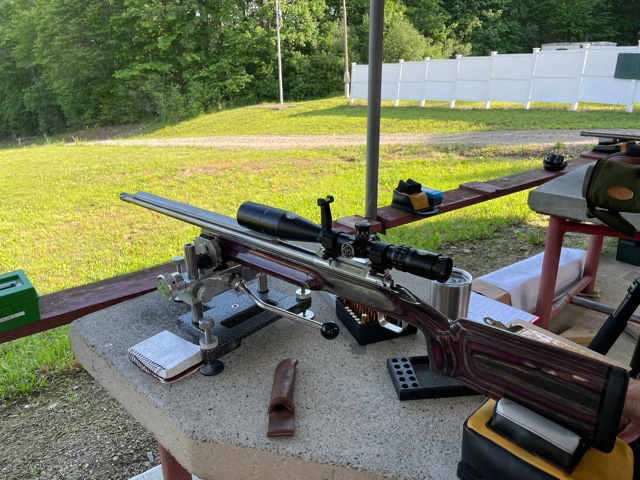 Here's a neat set of binoculars I saw at the match. They were made by Oberwerk, but I'm not sure of the model, maybe BT-70XL-ED? 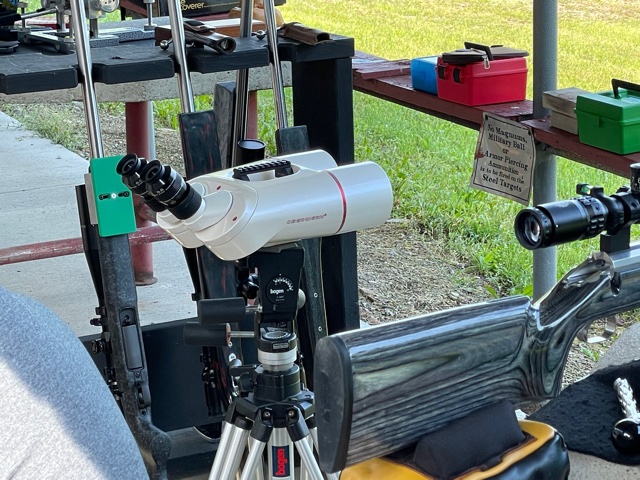 I saw a few rifles with tuners on them. The one guy I talked to said they helped him eliminate vertical stringing. Most other rifles wore muzzle brakes, so the shooter could watch bullet strikes at those long ranges. I remember seeing my 900 yard gong hit through the scope. That was cool. 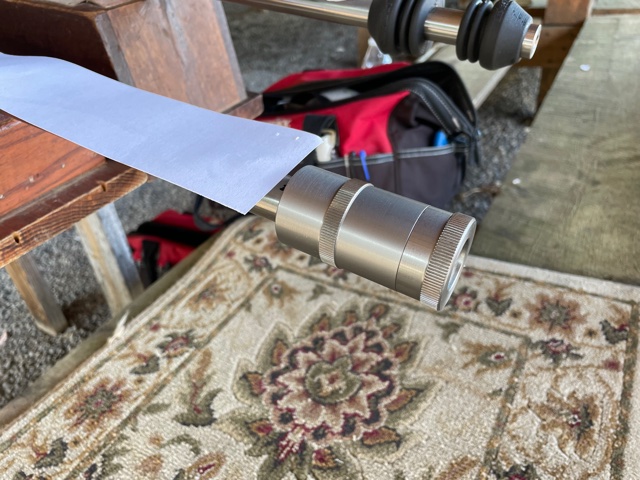 If I lived closer, I could see myself getting into VBR game. I looked like a bunch fo fun!
Reactions: Painless
R

Man, you covered some ground on that trip !
Looks like a lot of good times !
B